Breaking Rocks, Restraining Prisoners, Defending Gardens - all in a day of the life of a martial arts master

Grandmaster (soke) Hausel from Gilbert, Arizona returned from teaching a martial arts clinic at the East Canyon Resort in the Oquirrh Mountains of Utah to the east of Salt Lake City in August, 2015. The 2015 Utah gassuku (outdoor training clinic for Okinawan martial arts) included a variety of martial arts such as tameshiwari, kamajutsu, hanbojutsu, hojojutsu and karate bunkai used in self-defense against an individual armed with a hand gun as well as a rifle.

During tameshiwari training, Soke taught the Utah students a little about geology and how to break rocks with their bare hands. Rocks can be challenging as they are not like boards and seldom provide a grain to break along. A couple of years ago, a taekwondo group broke boards at a demo at the Islands clubhouse in Gilbert. Honestly, it was pathetic as these boards offered no resistance and we had no idea one could purchase boards that thin. we've seen taekwondo demos in the past that were very entertaining - this one was not. Personally, we enjoy watching people break bricks or ice and putting some effort into breaking.

At the Utah Clinic, the group was quite impressed they could break rocks as none of them had tried before. Soke also gave them a little lecture on rock types and what kind of rocks are a little more user friendly and why they should avoid granite, gabbro, basalt and rhyolite (rocks common in the Phoenix valley).

Hojojutsu is a traditional samurai martial art that uses cord or rope to restrain prisoners. The hojojutsu is always a lot of fun for students who have never seen this art - actually its fun as there is nothing more satisfying than tying up your partner with a rope and watching them squirm. They usually look completely helpless.

Over the past few years, Soke Hausel has been teaching members of the Utah Shorin-Kai as well as members of the Arizona Hombu the art of hanbojutsu. At the Utah clinic, soke reviewed strikes, throws and chokes with the hanbo (a 3-foot stick) and added a couple of new techniques. The hanbo is a great weapon as it can be carried anywhere - much like a cane.

Kamajutsu is a traditional Okinawan martial art that uses a pair of sickles for self defense. These are great weapons and we spent a few hours at the clinic practicing kata bunkai (practical applications hidden in kata).  Then it was time to train in self-defense against an armed attacker with knife, handgun and rifle. These techniques are simple, but must be practiced over and over again in case one ends up in a situation where an aggressor has a gun. 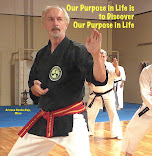 Chandler Librarians Use Books and Knees

Librarians at the Chandler Public Library in Arizona listen to Hall-of-Fame Grandmaster Hausel discuss the use of library tools for se...